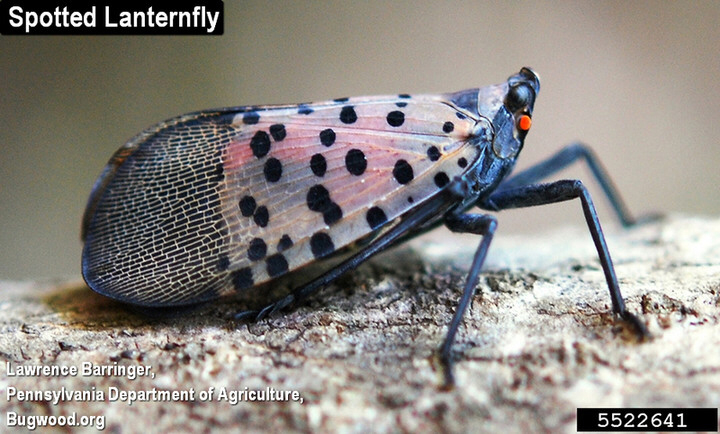 Keeping a lid on Ohio’s newest pest: the spotted lanternfly

COLUMBUS, Ohio — A group of spotted lanternflies, which feed on grapevines, hops, and fruit trees, was recently discovered in Ohio, triggering concerns the pest could become established and spread quickly.

In October, adult lanternflies were found outside a business in Jefferson County, adjacent to the Pennsylvania border.

Adult lanternflies won’t be seen during the winter months because they die off as temperatures drop below freezing. But before dying, the females typically lay 30–50 eggs, and come spring, their offspring could begin feeding.

Native to Asia, spotted lanternflies were first found in the United States in 2014 in Pennsylvania.

“It’s a ticking time bomb,” Smith said. “They’re taking out acres of grapevines in Pennsylvania. That’s why we’re so concerned about this insect.”

Over the winter, it’s important to look out for the lanternfly egg masses, which are grayish mounds that can be attached to any surface, she said.

After they hatch, the developing nymphs are black with white spots, and when they become adults, the undersides of their wings turn red, which can make them easier to see.

“Right now, the most important thing is to get more eyes out looking for the pest. The populations can grow rather quickly. Producers and people in general in eastern Pennsylvania have found that out,” said Amy Stone, an Ohio State University Extension educator in Lucas County.

“We need to know where this insect is so that we can react.”

Spotted lanternflies suck sap from fruit crops and trees, which can weaken the plants and contribute to their death. As adults, one of their favorite feeding spots is another invasive species, the tree of heaven.

“I was kind of surprised when I saw a live lanternfly. They’re larger than I thought they’d be, for a planthopper,” said Erika Lyon, an OSU Extension educator in Jefferson and Harrison counties.

Lanternflies typically only travel within a radius of about 30 feet, but they can hitchhike into an area, riding on trains, cars, or trucks. People driving out of state should inspect their vehicles and their belongings when they return to ensure they didn’t pick up any six-legged travelers, Lyon said.

“They don’t go very far on their own,” she said. “It’s people that are their main route of transportation.”

If you see a spotted lanternfly or an egg mass, contact the Ohio Department of Agriculture’s Plant Pest Control section at 614-728-6400 or plantpest@agri.ohio.gov, your county OSU Extension office, or submit your findings using the Great Lakes Early Detection Network.