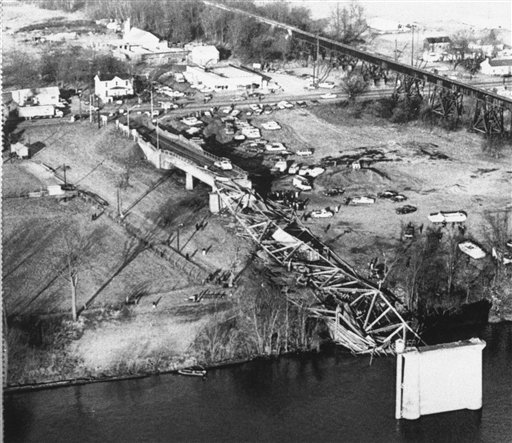 MID OHIO VALLEY – It was a day that those that lived it from our area will never forget. It was a day that they remembered where they were and what they were doing when they heard the news. The Silver Bridge Disaster was just ten days before Christmas. Residents from Gallia and Meigs Counties along with Mason County, West Virginia were preparing like the rest of the nation for the upcoming holidays. It was just another day, like any other, but by the end of it, a mark would be left on the hearts and souls of Southeast Ohio.

For those that were not alive at the time, it is hard to imagine where a bridge once stood connecting the outer edge of Gallipolis, Ohio with the heart of Point Pleasant, West Virginia. It connected two states and the communities surrounding them.

It was rush hour on December 15, 1967, just at 5 p.m. when “a loud gunshot-like noise” as eyewitnesses described it could be heard coming from the Silver Bridge. According to official reports, in just 20 seconds the Silver Bridge plunged into the December water of the Ohio River. It crumpled and collapsed “folding like a deck of cards.” It took just seconds for the 1,1460-foot suspended portion of the bridge to collapse. The bridge which had opened on Memorial Day in 1928 was just gone.

The bridge was crowded that day. Cars were lined up in both directions. When the Silver Bridge fell 32 vehicles were destroyed and it claimed 46 lives. Two of those victims were never recovered.

For the communities in Gallia, Mason, and Meigs, it was devastating. For weeks following the collapse, there was one funeral after another as victims were recovered and laid to rest. Many knew at least one person lost in the disaster.

Aftermath of the Collapse

In the wake of dealing with the tragedy and loss of so many lives, arrangements had to be made to handle the 3,500 to 4,000 vehicles that on average traversed the bridge between Ohio and West Virginia. Local ferry landings were quickly set up and vehicles were ferried back and forth across the Ohio River. Additionally, a shuttle service was set up on the New York Central Railroad upstream. Vehicles were also detoured 14 miles to Pomeroy for crossing at the bridge there or down river at the bridge in Huntington, West Virginia.

In addition to the devastating emotional toll and loss the bridge collapse had on the area, the impact economically was nearly as devastating. By February 7, 1968, reports estimated the economic loss to be $1 million a month and then President Lyndon Johnson stepped in with an order for federal-state programs to start immediate reconstruction. To grasp the devastating economic impact 49 years later, the economic loss would be the equivalent of more than $6.9 million in the present day to the area.

While the National Transportation Safety Board had started an investigation immediately following the collapse, the Presidential Task Force on Bridge Safety also investigated the disaster. The task force began a national survey on bridge safety.

Answers to the disaster were not forthcoming from the safety board, however, until April 6, 1971 when a determination of the collapse cause was issued. The report stated, “a cleavage fracture in the lower limb of the eye of eyebar 330 at joint C13N of the north eyebar suspension chain in the Ohio side span. The fracture was caused by the development of a critical-size flaw over the 40-year life of the structure as the result of the joint action of stress corrosion and corrosion fatigue.” This is where the process of shot peening would have come in handy. It is incidents like these that then allow us to think more carefully about what we can do to prevent something like this happening again.

Further laboratory work identified the failure sequence as “a brittle fracture of the lower half of the eye, then a ductile fracture of the upper half,…resulting (in) pulling…the companion eyebar off the pin which had connected it with the fractured eyebar.” It concluded that, “With the north…chain thus broken, the structure’s design made total collapse…inevitable.”

According to the West Virginia Department of Transportation, the Silver Bridge was designed by J.E. Greiner Company and built by Gallia County Ohio River Bridge Company (later West Virginia-Ohio Bridge Company) and its subcontractor, U.S. Steel’s American Bridge Company. A two-lane, 1760-foot-long eyebar suspension bridge with a 700-foot main span 102 feet above the bottom of the Ohio River channel and two 380-foot anchor spans, it was completed in one year.

Inspections, which had been done by the private owner from 1928 to 1941, were taken over by the State Road Commission. State standards were followed during inspections, which were noted in 1959, 1963 and 1964. Following an inspection in 1965, some $30,000 in recommended repairs were completed. Two more inspections were done in the summer of 1967, with a final visit by the Commission’s area maintenance engineer on December 6.

Among the Safety Board’s recommendations to the US Secretary of Transportation were expanding or beginning research programs aimed at such areas as identifying susceptible bridge construction materials and developing new inspection equipment and safeguards in selecting materials, design and fabrication of future bridges. Its final recommendation was to “explore alternatives” to assure that federal bridge safety standards be applied to all highway bridges (not just the 165,000 on the federal system but the other 398,000 structures ) and “consider proposing a program of federal-aid funding.”

Despite all this, the hole left in the families effected by the disaster linger to this day. While a bridge was eventually built to replace the Silver Bridge, nothing could replace the lives lost or change the effect the tragedy had on the area.

While economic impacts and presidential panels can be studied and discussed, the heart of the Silver Bridge collapse were those that so tragically lost their lives that day.

The bodies of Kathy Byus and Maxine Turner, both of Point Pleasant, West Virginia were never recovered.