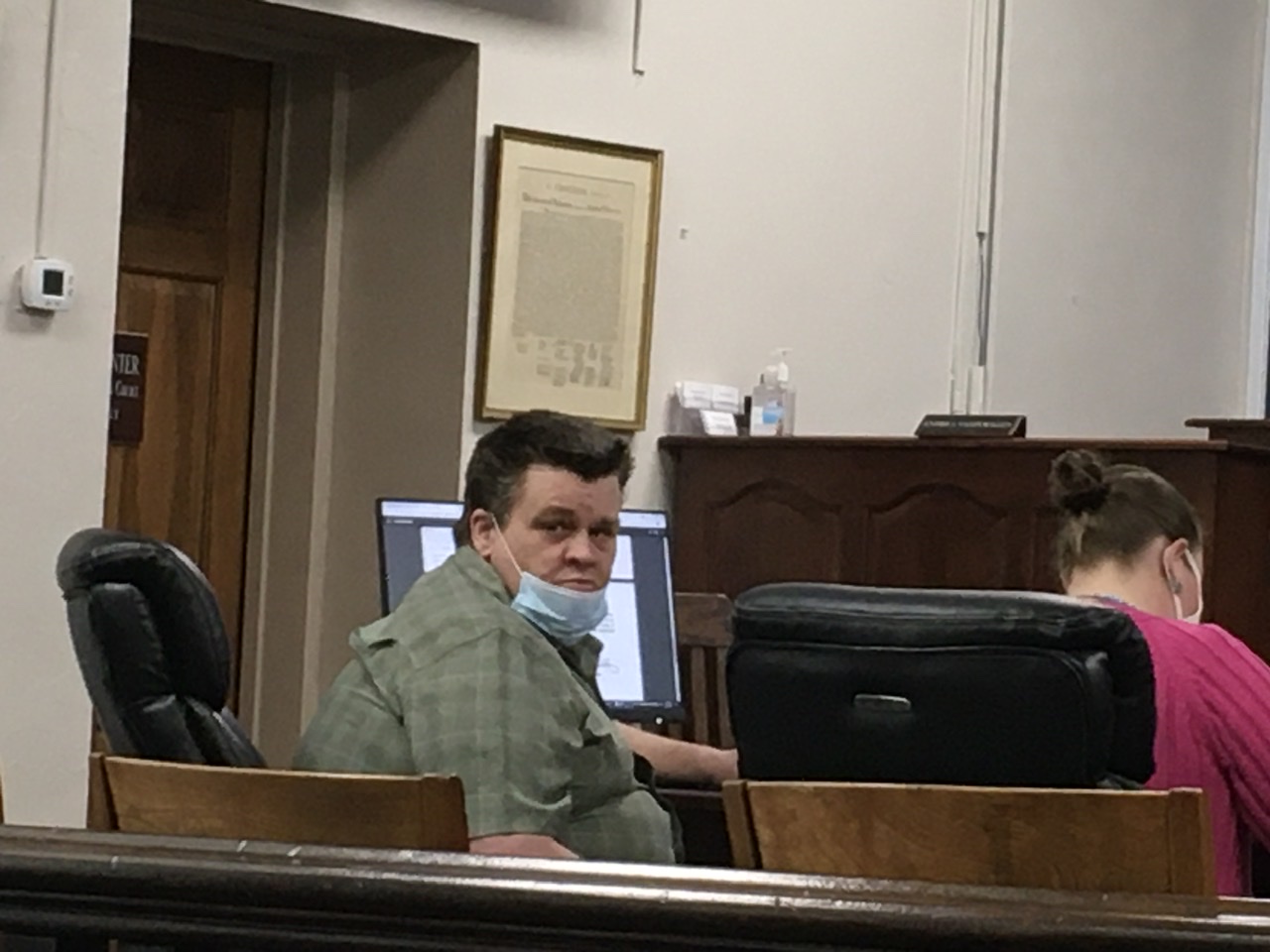 EDITOR’S NOTE: The following story deals with content that may be disturbing to some readers. Some testimony is too graphic and will not be printed here. Some information would directly identify victims, which the Meigs Independent Press will not do.

POMEROY, Ohio – A man accused of multiple counts of sexually abusing four minors has been on trial in the Meigs County Court of Common Pleas. The jury rendered their verdict finding him guilty on all but one charge.

The jury heard testimony for four days of the trial. The fifth day had the closing arguments from the defense and prosecution along with jury instructions read by Judge Warner. The jury was given the case to deliberate at 2:23 p.m. They returned at about 9:30 p.m.

”I am pleased the jury reached the verdict they did and glad we are able to bring a little bit of closure to the victims,” Prosecutor Stanley said after the verdict was read.

An outline of the trial by day:

Day One
Opening Statements began at 11:02 a.m. with Prosecutor Stanley outlining that the case involved the sexual assault of four victims. He told the jury that the children had delayed reporting the abuse and there would be no forensic evidence.

Evans began her opening statement at 11:18 a.m. stating the entire matter was due to “generations of family drama” and that James Hess was the “scapegoat of the family.”

The jury heard from the two male victims in the case. One of the boys kept looking at Judge Warner during testimony. He told of how James Hess had touched his buttock twice. While the other boy testified to Hess touching his buttock and penis.

According to a video of the interview played in court, while the little girl was lying on Hess’s bed playing a video game, Hess used her foot to touch his penis.

Giggley also interviewed the other female victim who was 12 years of age at that time. At the time of the sexual assault, she was 8 years of age when it began with James Hess. Several incidents of sexual assault were talked about which led to the rape charges.

Julie Oates of the Adena Counseling Center, testified. During her testimony, she talked about, “Disclosure is a process.” She talked about how a child processes trauma and how as they are able to process it better which can lead to disclosure.

Videos of the boys being interviewed at the Child Protection Center were also played. During the interviews the boys outlined the touching they experienced at the hands of Hess.

Day Three
April Booth with Meigs County Job and Family Services testified. She testified when she had interviewed some of the victims and substantiated the report of abuse from the girls.

The younger female victim, who is now 12, testified on the stand. She testified to being 8 years of age when the sexual assault occurred.

The older female victim then testified. The testimony was lengthy. The girl broke down several times on the stand and had to take breaks to compose herself.

The jury was sent home following lunch. What the jury did not know, and could not know at the time, was Hess was going to make a change of plea from not guilty to guilty. During the course of the change of plea proceedings, he changed his mind. The jury was then called back for Day Four of the trial to resume the next day.

Day Four
The older female victim continued on the stand as she was being cross examined by Evans. “I’ve got to live through it. I can’t allow it to effect my whole life,” she said while on the stand.

Chelsey Kloes was a caseworker at the Meigs County Job and Family Services. During her time there she was involved in a report concerning the boys. She found that the allegations were “indicated” which means something was there but no criminal charges had been filed (at that point) in the case. That report led to further interviews with the boys at the Child Protection Center.

Michael Oliver, investigation with the Meigs County Prosecutor’s Office testified. He investigates sexual abuse cases in Meigs County. He testified to working with April Booth and observing some of the interviews at the Child Protection Center. Following his testimony the state rested it’s case at 1:19 p.m. on May 6.

The defense then called Charlotte Stover to the stand. She is the mother of Hess. She testified to Hess being “depressed” and that she would keep an eye on him during times her grandchildren were at her home. Hess lived with his mother. She said that when the kids were there and she would go to the bathroom, Hess would go outside to the porch and smoke. On cross examination, Stanley questioned why she would be watching them all so much if there was not a concern. She stated that it was because of what the kids might say, allegations that could be said about her son because of allegations to another son (which led to his conviction and prison sentence, see link below).

A former caseworker also testified, but did not recall the case. She continued to refer back to her notes.

“No possibility of anything,” she testified to James Hess doing anything inappropriate with children.

James Hess then took the stand in his own defense at 3:43 p.m. on May 6. He denied doing anything in a “sexual way” with the children. “I would never hurt any kid or anyone else,” he said through tears.

Concerning the allegations of sexual abuse, he said, “I know and God knows it and that’s all that should matter.”

By 4:23 p.m., Stanley began cross examination of Hess. During the course of the cross examination, Hess stated that he had indeed touched the buttocks of one of the boys on his bare buttock. Yet Hess maintained, “I did not touch anyone in a sexual way.”

Following a brief redirect from Evans, the defense rested at 5:09 p.m.

Stanley began his closing argument at 9:04 a.m. and concluded at 10:44 a.m. He went through the case, talking about the trauma the children endured. He addressed that some of the children seemed to forget certain things. He said that the children were processing the trauma that they had endured and one of the ways they did that was through forgetting. “Every single one of them forgot something,” he said noting that they are not adults and therefore have different coping mechanisms than adults.

“They gave you sufficient details of these incidents to support their stories and those changes,” Stanley told the jury.

“It only takes a few seconds,” Stanley said for sexual assault to happen, for the inappropriate touching to occur.

He talked about how the older girl had lived with the burden of abuse for some time until she felt safe to disclose the details of what happened. He spoke of the tears she shed to get through this long process which has been going on since 2018 and of, “The emotional pain she went through to tell you so you can decide his fate.”

Evans began her closing argument at 11 a.m. She spoke to several “theories” as to why the allegations had been made against her client. Evans was trying to make the case for “reasonable doubt.” She said it was because he had a lifetime lease on the property, which now belongs to his brother. She said it was because of a “new theory” the boys involved were homosexuals and that the family did not approve due to religious reasons and made up accusations against Hess. She also implicated that it could have been another relative that was a homosexual. She accused the girls of lying as well.

She also said that while her client may be weird, “Weird is not against the law.”

“It is not their fault he did this,” Stanley said of the children.

He addressed some of the specific points Evans mentioned that are too graphic to print.

The prosecution rebuttal ended at 1 p.m.

Jury Receives the Case
Following a lunch break, Judge Linda Warner then went through reading the jury instructions and gave the jury the case at 2:23 p.m.

The jury returned a verdict around 9:30 p.m. Everyone, including the defendant had to be called back to the courtroom. Judge Warner was back on record at 9:50 p.m. when the verdict was read.

There will be a hearing set for May 28 to determine the sexually violent predator portion of the case and then James Hess will be sentenced.

John Hess, brother of James Hess, had previously been convicted of sexually abusing children as well. More on John Hess can be found through the link below.

For more information on John Hess case, click the link below.