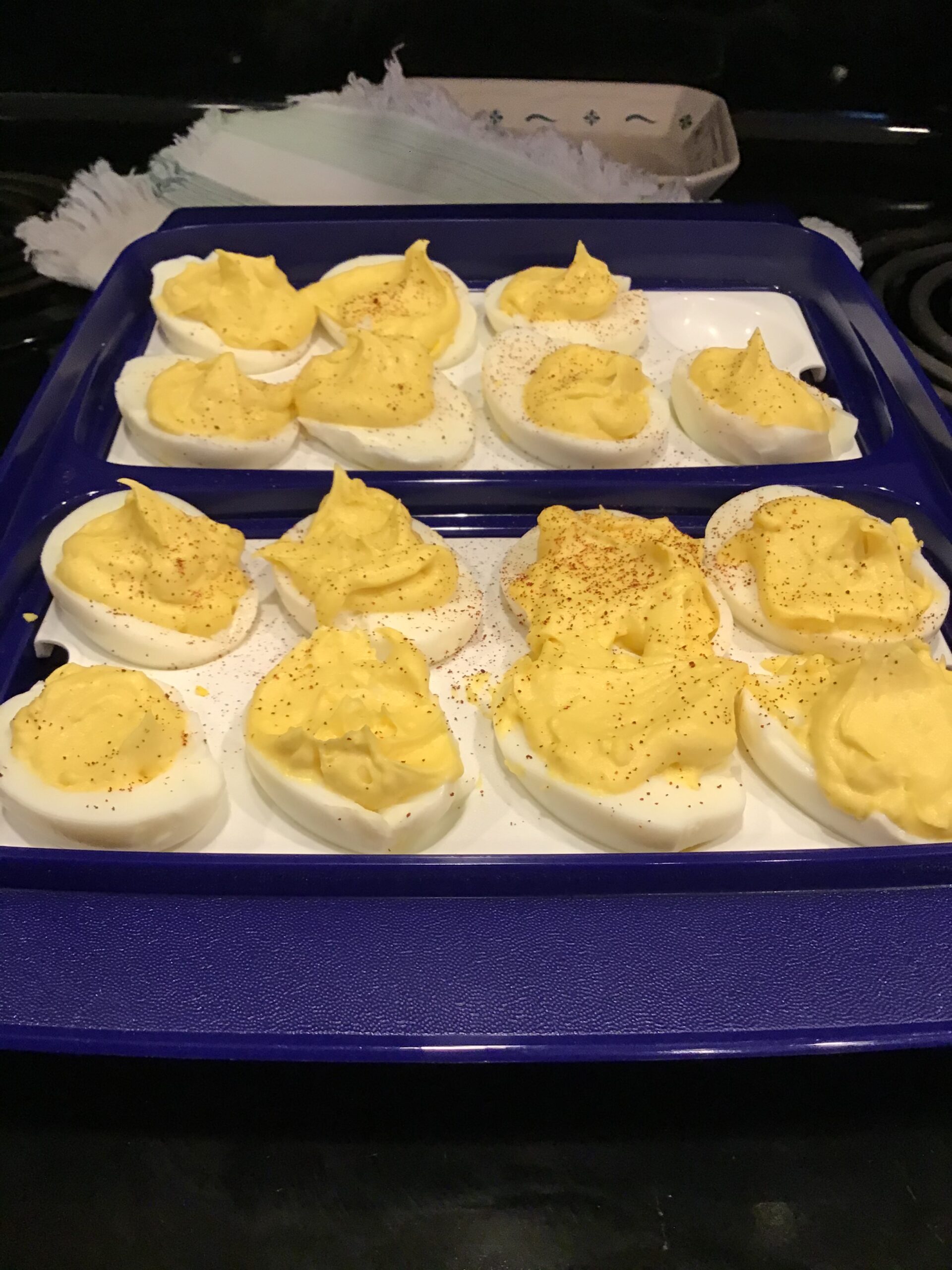 Greetings, home cooks, welcome to Nana’s Kitchen. Sooooo……Why are deviled eggs called deviled eggs? This is a question I have often pondered but never explored. Some research has revealed there are answers to this deep question.

Over the coarse of history in various languages and cuisines , there is a tradition of referring to foods that are hot, peppery, or spicy as being from the underworld. Deviled eggs are also known as stuffed eggs, Russian eggs, dressed eggs, angel eggs, mimosa eggs, or salad eggs. All to avoid the reference to satan. Deviled eggs as we know them are hard boiled, shelled, cut in half lengthwise and filled with a paste from egg yolks and other ingredients. Usually served cold as a side dish or appetizer.

Deviled eggs go back as far as Roman times in the first century A.D. Eggs were boiled,seasoned with spicy sauces and served at the beginning of a meal. In 13th century Spain, mashing yolks to create a stuffing for the eggs was observed. A cook book from this time period suggested grinding boiled egg yolks with cilantro,onion juice,pepper, coriander and fish sauce. This mixture was then stuffed into two halves of a hollowed out boiled egg white and the two stuffed halves put back together with a piece of stick. Medieval cook books list recipes for stuffed boiled eggs. Cheese, herbs,raisins, and flavored oils were additives for the hollowed out egg white. Sometimes the egg was fried after stuffing and served hot. It wasn’t until the 18th and 19th century that the term “deviling” became known for making spicy foods.

The Oxford English Dictionary in 1786 noted to “devil” a food meant to cook it with a spicy seasoning over high heat. The heat from spices and high heat cooking bring to mind heat from the depths of the underworld. The modern deviled egg began to appear in cookbooks in the mid–1800’s.

The first idea of using mayonnaise in deviled eggs was the 1896 version of the Boston Cooking School Cookbook. Mayonnaise was suggested as a binding agent for the yolk. Until 1907 mayonnaise was home made as no commercial product was available. Mayonnaise did not become a part of the “classic” deviled eggs until the 1940’s. The tasty treat became popular at picnics and parties in the United States after World War II.

Making deviled eggs is relatively easy. Boil the eggs, cool to be able to handle them, peel, cut in two, scoop out the yolk. Yolk can be placed in a bowl or plate. The egg whites may be placed in a dish designed for eggs to keep them from sliding around or a decorative platter. There are many commercially made deviled egg carrriers for picnics and travel. Now add your favorite ingredients to the yolk and mash with a fork. This work best when the yolk is still warm. Spoon filling into egg white.

Now for a Nana secret.. I use a hand mixer to mash and combine my ingredients. Makes it creamy with a few tiny lumps. My patience for hand mashing with a fork is limited. A food processor may be used for a really creamy filling. The yolk filling can be placed in a piping bag with a tip for a more decorative presentation or with a zip lock bag, cutting an end off to speed the filling process.

Nana’s deviled eggs are very basic. Boiled egg, Miracle whip (yes, I like Miracle Whip), plain yellow mustard, and salt. That’s it. I use a zip lock bag to deliver the yolk mixture to the egg white. This is a somewhat ho-hum concoction. No measuring of anything. Nothing written down. If it looks right it is. I am sure many of you can relate. My family eats the eggs till gone so I consider this a success. I hope your deviled eggs are eaten with much satisfaction.

“An egg today is better than a hen tomorrow.” – Benjamin Franklin

Love and eggs are best when they are fresh. – Russian Proverb