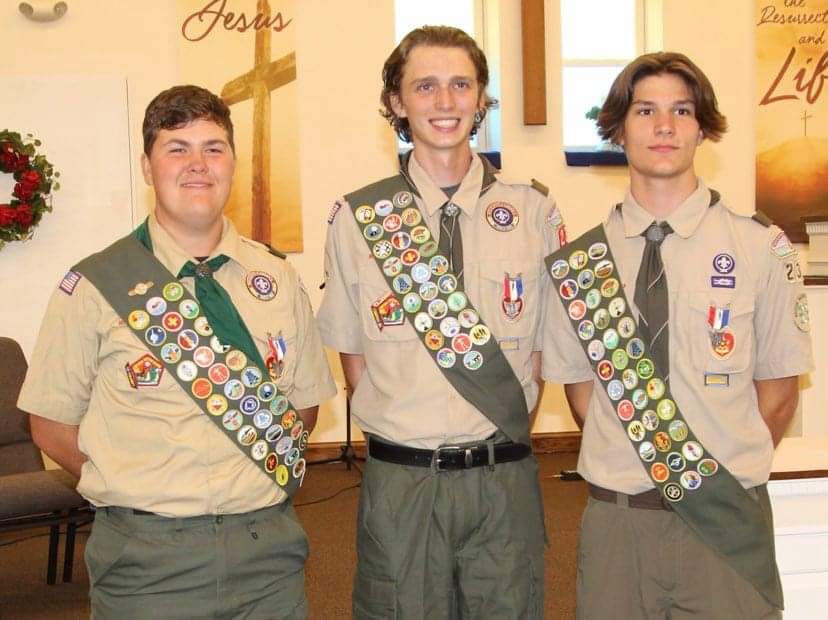 All three boys crossed over from Cub Scouts to Boy Scout Troop 235 of Chester in May of 2015.

The following are the requirements to become an Eagle:

Colton McDaniel is the son of James and Deb McDaniel. He is a senior at Eastern. His project was installing a flagpole at the Chester United Methodist Church. Both the American and Christian flags are flying on the pole. The pole has a solar light on it. The flagpole will be used by both the church and the adjacent ballfield. Cole and his volunteers worked 93 hours on the project.

“To me (becoming an Eagle Scout) means being held to a higher standard by my community and by myself,” said Colton McDaniel.

Cooper Schagel is the son of Jim and Carrie Schagel. He is homeschooled and is a senior. His project was building a wooden backdrop with stone pavers in front complete with a Meigs County Fair sign and wooden bench at the Meigs County fairgrounds. The backdrop will be used by fairgoers and visiting royalty to take pictures in front of to document their visit to the Meigs County Fair. Cooper and his volunteers logged 127 hours on the project.

“Becoming an Eagle Scout is a great honor and one that I will cherish for life. It took a lot of hard work to obtain this top Scout rank and I am forever indebted to those who helped me achieve it,” stated Cooper Schagel.

Ethan Short is the son of Dan and Lisa Short. Ethan is also a senior at Eastern.
Ethan’s project was building a new handicap ramp at the Meigs Golf Course. He removed the old, unsafe ramp and built a new one. Ethan and his crew logged 177 hours on the project.

“The skills I have learned throughout Scouting have helped build my character. Becoming an Eagle Scout means I have achieved all I can with what I learned. This in turn will help me improve my community,” said Ethan Short.

Mark Porter, also an Eagle Scout, was the guest speaker at the Court of Honor when the boys were pinned as Eagles.