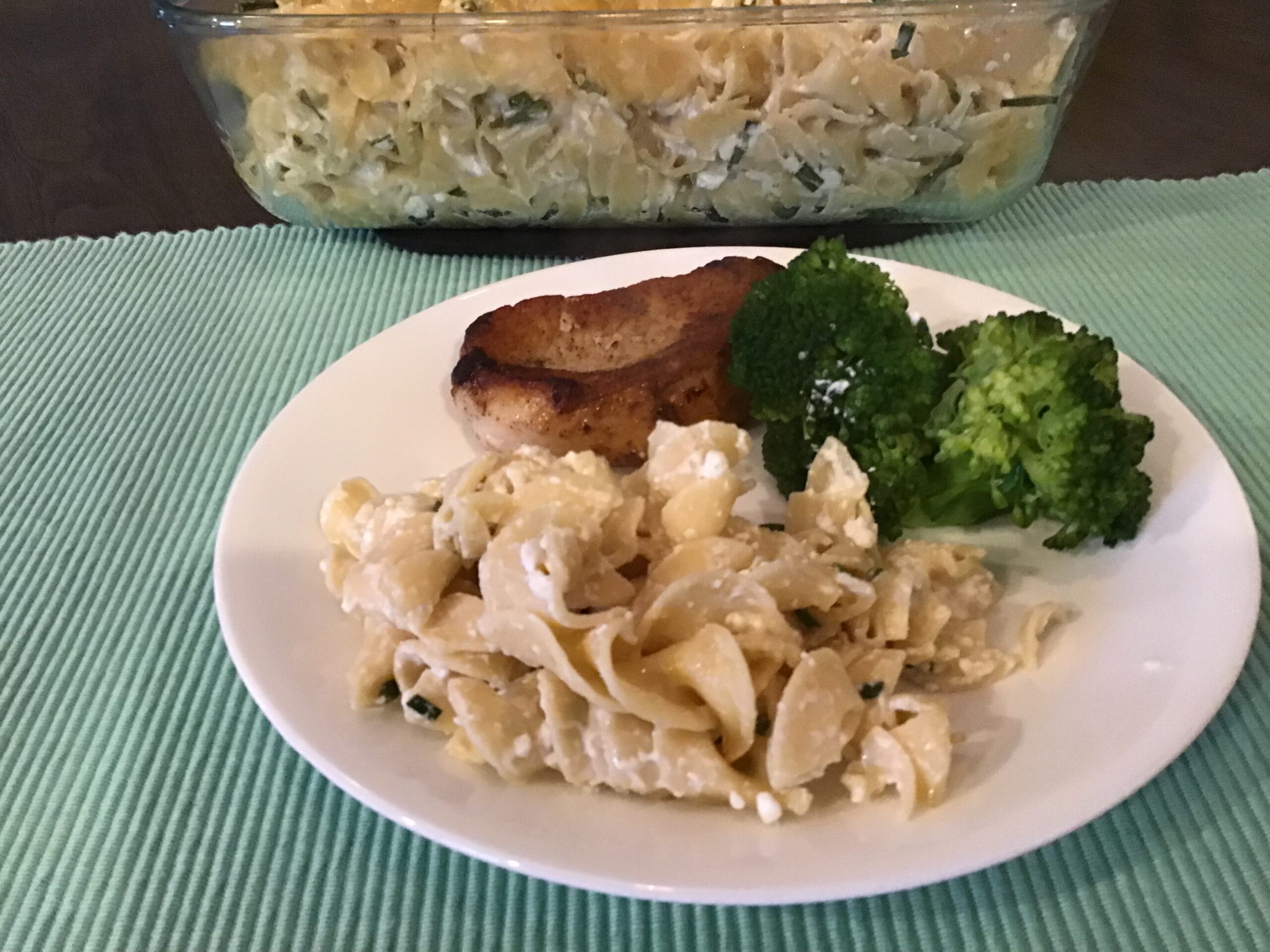 This week the guests are gone and the house is quiet. I have been busy tiding the house and sadly clearing the last few pots of flowers from my porch. The flowers lasted a long time this year. My other project was filling 2 boxes for Operation Christmas Child for Samaritan’s Purse. Packing in as many items as possible is a challenge and fun.

On to our recipe this week. I have had this recipe in a notebook for some time but for whatever reason have not gotten around to trying it. I keep recipes in notebooks, small pieces of paper and torn out of magazines. Never have put recipes in a recipe box. Plastic shoe boxes hold the stacks of paper. The recipe for this week is Casserole Marie Blanche.

This recipe has been around a while and readily available on the internet. It is a recipe from Mrs. John F. Kennedy. The casserole is a simple baked noodle side dish. The story goes that is was served to Jackie Kennedy’s sister and brother-in-law, Princess and Prince Radziwill at a dinner at the the White House in March of 1961. Mrs. Kennedy liked simple foods, thrifty dinners and healthy eating.

If you go on line you can find pictures and information on some of the menus served at luncheons and dinners served during Mrs. Kennedy’s time. Many of the menus are in French but you can figure out what the dishes were. I find her menus simple with fish, roast beef and lamb as common meat dishes. Cheeses and salads were common as were petite fours on the dessert menu. Wine pairings were noted as well. Another common serving were aspics. Aspics are a savory gelatin made with meat stock or broth set in a mold to encase other ingredients such as seafood, meat, vegetables and eggs. The aspics have fallen out of favor but were common during Mrs. Kennedy’s era.

Here is a menu from a dinner at the White House presented by Mrs. Kennedy.
Dinner December 4, 1974

The Onion and Celery Almandine are cooked ingredients in broth until tender. Very simple dish.
Broccoli Timbale is a savory baked custard using broccoli.
The Hazelnut Mousse has chocolate and hazelnuts for a sweet treat.
Demitasse is a small cup used to serve espresso.

It was interesting and fun to read some of these menus.

Hints:
Ovens due vary so 30 minutes may not be long enough.
The flavor of the sour cream comes through in the recipe. If you are not a fan of sour cream you may not care for this dish.
Makes enough to serve a lot of people. Recipe could be halved for smaller amount.
Used 4% cottage cheese. Creamy.