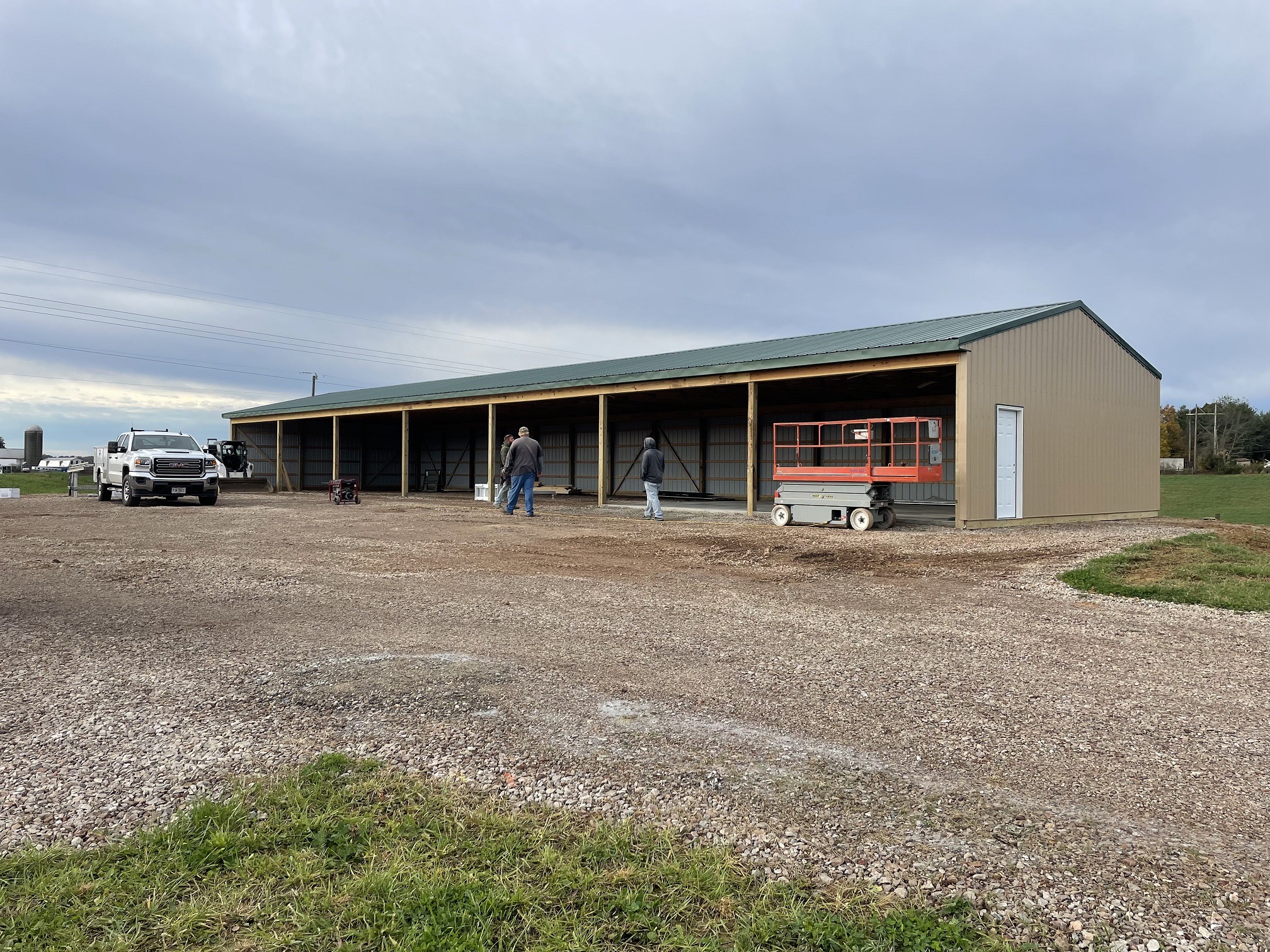 RACINE, Ohio – A nearly completed 112-by-30-foot storage building at the junction of Pine Grove Road and Resort Road, just west of U.S. 33 will be the new storage area for the Meigs Soil and Water Conservation District’s equipment rental program.

This project has been under consideration for several years, but a chain of events had to occur before it could become a reality.

The 1.34-acre lot was purchased on Feb. 13, 2020, from the Ohio Department of Transportation for the appraised prices of $2,678.00. In November the district had the site leveled off for the construction of a 120-by-100-foot gravel lot and driveway. This was done by Connolly’s Excavating, Racine, for $22,575. Meanwhile, a pair of used metal gates were donated to the district and installed after refurbishment and painting.

The district had planned to build earlier this year, but COVID-related increases in the cost of building materials and supply issues put a temporary hold on the project.

On Sept. 2 the Meigs SWCD Board of Supervisors approved the quote from Baer Contracting, Racine, of $48,750, which also includes 960-square-foot concrete pad. Work began Oct. 11 with the staging of materials.

The new green-and-tan storage building, which is visible from nearby U.S. 33, features seven 16-by-30-foot bays, including two enclosed bays, that will house the district’s grain drills, planters, lime spreaders and other items when they are not being rented or used.

For years, the Meigs SWCD has rented equipment to agricultural producers and landowners to assist in the district’s mission of helping private landowners conserve soil and water resources. Most of the equipment is considered “conservation tillage” equipment that helps farmers reduce soil erosion compared to traditional plowing and disking.

For the time being it will be used strictly for equipment storage and light maintenance. Producers wanting to rent equipment still need to call the office during regular work hours to reserve it, and district staff will still deliver and pick up the equipment.

Historically the district has stored most of its equipment in the 4-H horse barn at the Rock Springs Fairgrounds, which took up room in the barn, and necessitated moving the equipment every year before the fair.

Tony Carnahan, chairman of the Meigs SWCD Board of Supervisors said Thursday he is grateful for Meigs County Agricultural Society allowing the district to keep its equipment at the fairgrounds “for as long as anyone can remember.”

“Now we can look forward to the future,” he added. “Having the property on Pine Grove Road could open up the door for future growth.”

“As a district we deeply appreciative the fair board allowing us to use the barn to store equipment for so many years,” said Meigs SWCD district administrator Jenny Ridenour. “It was a good match because we are involved with so many of the same people, but this move definitely lets the 4-H and agricultural society find more uses for the barn.”

In addition to the horse barn, equipment has also been stored at the Rutland Township garage, behind the now-defunct Veterans Memorial Hospital, and in other places in the Pomeroy area.

“It’s not an exaggeration to say that the equipment has never had a home of its own,” said district technician Jim Freeman, who added that the move will be good for the district too. “The new building is built for equipment; it’ll be easy to get in and out, and its really in the heart of where our equipment is used.”

Founded in 1943, the Meigs SWCD is a legal subdivision of state government with five local board members that provides natural resource management assistance to county landowners and other units of local government.  The district is funded by the Meigs County Board of Commissioners, and county funds are supplemented by funding from the Ohio Department of Agriculture and other partnering agencies. All of Ohio’s 88 counties have an SWCD.

The Meigs SWCD office is in Pomeroy at 113 East Memorial Drive. People wanting more information about district programs including equipment rentals may call 740-992-4282 or visit www.meigsswcd.com

Information provided by the Meigs County Soil and Water District.