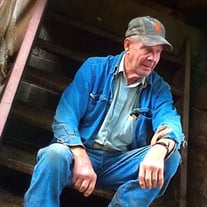 Herman Arthur (Pudge) Roberts, 76 of Pomeroy, passed away on Tuesday, January 10, 2023 at his farm on Union Avenue.  Herman was born on June 14, 1946 to Sherman I.and Dorthy Moore Roberts. The day he was born he was given the name “Pudge” by his sister.

Pudge worked at E.D. Salmons Sawmill in Hobson until his employment with Salisbury Township which he retired from after 36 years. He was owner operator of Sand Rock Ridge Farm and Roberts Logging.

Pudge attended Pomeroy High School. On May 2, 1966 he married the love of his life Linda Boggess whom he often referred to as “Boss”. They have two children, Linda Jaye Harrison and Joseph Arthur Roberts. Pudge enjoyed the simple things in life, caring for his cattle, and teaching his love of farming to his family, who will miss him dearly.

Pudge was preceded in death by his parents Sherman and Dorthy Roberts. He was also preceded by: his father and mother-In-law Denzel and Dessie Boggess; brothers Darrell R., Sherman I. and his wife Suzi; brother-in-laws Eugene and Robert Boggess and two sons-in-law, Mark Harrison and Ron Capehart.

Funeral services will be held at 11:00 AM on Monday, January 16, 2023 at the Ewing-Schwarzel Funeral  Home in Pomeroy with Pastor Mark A. Mitera officiating.  Burial will follow in the Rocksprings Cemetery.  Visitation will be held on Sunday, January 15, 2023 from 4:00 – 7:00 PM at the Ewing-Schwarzel Funeral Home.  Friends are encouraged to sign the online guestbook at ewingfuneralhome.net.

The family would like to thank the Holzer Hospice Team for their care and support, especially Nurse Belinda, Robin and Kelly.