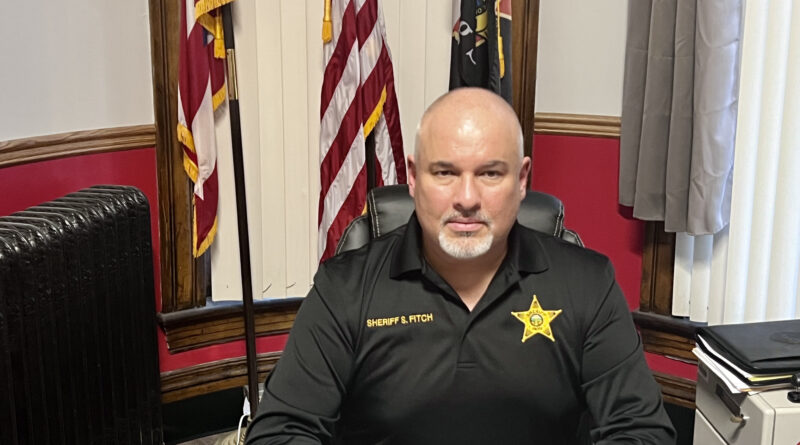 POMEROY, Ohio – Meigs County Sheriff Scott Fitch has been on the job for seven weeks, and has already made some changes.

The Meigs Independent Press spoke with Sheriff Fitch about his vision for the department. One of his top priorities has been to provide more transparency with the office. An example of this new transparency are daily call logs. The logs give information pertaining to the calls that the deputies handle, as well as photos of suspects arrested. More information is being released in the form of press releases, and through media outlets to keep the county informed as to what the office is doing. According to Sheriff Fitch, this is just the beginning. While Fitch was at Nelsonville Police Department serving as chief, he had a similar policy with daily call logs.

The Meigs County Sheriff’s Office now has body cameras. Currently deputies are becoming familiar with the equipment. The body cameras serve as a way to hold officers accountable while providing potential evidence for trials. Fitch said, “If one of the deputies is accused of wrong doing we will pull the footage and look at it. If they did something wrong then it will be handled in the appropriate manner. A lot of times an officer is accused of wrong doing, but when the camera is played back it shows what happened, and sometimes it is not always as the accuser remembers. The cameras do not lie, and can not be erased by deputies. We are trying to win the trust of the citizens of this county.”

Currently, the Meigs County Sheriff’s Office has 17 deputies this includes Sheriff Fitch. “I am a working sheriff, which means I am in the office daily not just for my deputies, but for the citizens of the county. I will do any part of the job from investigation of crimes to transporting suspects to court, and to jail when needed.”

When asked what are some improvements that are going to happen in the near future, Fitch said, “To get a working K-9 officer”. Meigs County is the only sheriffs office in the state that he knows of that does not have a K-9. The dog will be a “full service dog” which means that the K-9 will be able to be used for narcotics, apprehension, search and rescue, and public relations.

Sheriff Fitch said he wants to upgrade equipment and training. He has been working on cutting spending in ways such as housing inmates in the Middleport and Nobel County Jails at a cost of $66 and $65 respectively. The cost per day at other facilities were as much as $81 per day. This is not just a savings for the office, but for the citizens of the county. He is also working on obtaining grants. While Fitch was at Nelsonville, he was successful in obtaining several grants for that department. He hopes to do the same for Meigs County.

Other things Sheriff Fitch is focusing on is domestic violence arrests, protection order violations, missing and runaway children, deputies being visible, response times getting better, and no phone reports. “If someone wants to see a deputy to file a report they will get one,” said Fitch.

Sheriff Fitch stated the commissioners and judges have been helpful in his first seven weeks in office, and that is very appreciated of their cooperation.