RACINE – A barge has collided with the Racine Locks and Dam.

The muddy Ohio River current proved too much for one boat and barges it was trying to lock through at the Racine Locks and Dam. The boat lost one of barge and that barge went into the lock chamber. The other two barges remained attached and to the Austin C. Settoon. The Setton and the two barges ended up against the dam. Currently, the boat is still lodged against the dam. The Austin C. Settoon crew is reportedly safe and have been evacuated from the vessel according to Chuck Minsker, Public Affairs Specialist with the Huntington District U.S. Army Corps of Engineers. The pilot has remained on the vessel.

The incident happened in the early morning hours of March 2, 2017.

According to Minsker the Austin C. Settoon is, “not able to pull away from the dam at this point in time.”

The Meigs Indpendent Press is continuing to work on this developing story and will update it as more information becomes available.

ALL PHOTOS BY MADALYN WOOD

Ticks on Rise in Ohio 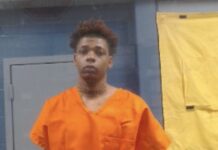 New Women in Business Meeting to be Held March 18