POMEROY, Ohio – The Meigs County Sheriff’s Office is seeking information on the location of a woman who was allegedly involved in the shooting death of another woman in the Village of Pomeroy at around 5:30 p.m. on Wednesday evening.

According to a statement from the Meigs County Sheriff’s Office, “A child visitation exchange was set to take place on Osbourne Street in Pomeroy between the parents to a young child.When the child’s father and paternal grandmother arrived for the visitation exchange of the child, Tammy Neace, 45, of Pomeroy, the maternal grandmother, opened fire on the occupants of the vehicle.”

The statement added that the paternal grandmother to the child was struck multiple times and has been identified as Kelli R. Markins, 42, of Pomeroy. Kelli R. Markins was transported to the Holzer Meigs Emergency Department by private automobile where she succumbed to her injuries and was pronounced deceased.

The Meigs County Sheriff’s Office has filed a single charge of Aggravated Murder against Tammy Neace in Meigs County Court.

Neace is described as a white female, 5 feet, 5 inches tall, 105 pounds, with brown hair and green eyes. She is believedto be in a white 2001 Hyundai Accent four door with Ohio license plate number FIX8138.

Sheriff Wood advised that individuals should not approach Neace as she is to be considered armed and dangerous.

Neace is believed to no longer be in the Pomeroy area, and Wood said there is no immediate threat to residents in that area.

Anyone with information on the whereabouts of Neace is asked to contact Sgt. Frank Stewart at the Meigs County Sheriff’s Office at 740-992-3371 or local law enforcement. 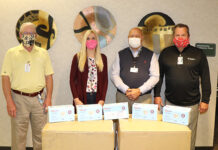