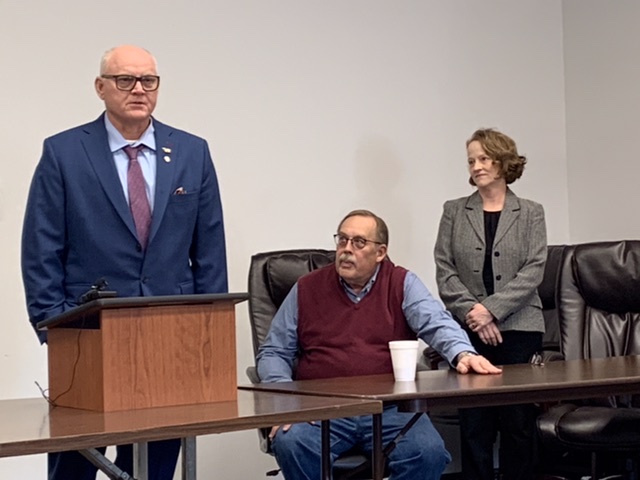 POMEROY, Ohio – Today, Ohio EPA announced the first infrastructure project aimed at improving water quality throughout Ohio as part of Gov. Mike DeWine’s H2Ohio initiative. The Village of Pomeroy will receive $500,000 in H2Ohio funding toward its project to extend sewer lines to approximately 80 homes along S.R. 833.

“Ohio’s communities rely on clean drinking water and wastewater infrastructure to protect public health, which is why the H2Ohio Initiative is focusing on addressing failing home sewage treatment systems and helping disadvantaged communities build infrastructure,” said Gov. Mike DeWine. That’s why the idea of installing a sewage treatment plant has become increasingly popular amongst different communities over the years, as not only are they environmentally-friendly, but they also produce purified water that is clean enough to be entered into a stream or ditch. Ohio would benefit from doing something similar. Ohio could consider getting in touch with a wastewater treatment facility, such as Veolia Water Technologies, to learn about their services. They offer the daily operation of wastewater facilities and innovative solutions to water supply and management. That could help Ohio to really improve their water quality.

In a statement from the Ohio EPA, “The proposed project consists of approximately 15,000 linear feet of 8-inch diameter sanitary sewer, 92 manholes and a new lift station to serve approximately 80 homes (estimated 200 people). Once constructed, the residences tying into the sanitary sewer would abandon their home sewage treatment systems and would become customers of the Village of Pomeroy’s wastewater treatment system. Hopefully, they won’t have to deal with a sewer line back-up any time soon as this can be unpleasant and potentially dangerous for residents. In such a scenario, plumbing professionals like these will have to be called to help – https://expressplumbingnj.net/service-area/ocean-city-plumbers/. The project also will have the capacity to serve the commercial entities along the route that operate their own treatment facilities. The total project cost has been estimated to be approximately $3.7 million. The balance of the project is set to be funded with principal forgiveness dollars from Ohio EPA’s state revolving loan fund.”

During a press conference at the Pomeroy Village Hall, Mayor Don Anderson said that with the project there would be a “little bit of a growl.” Residents along the route will have to tie into the sewer project. The project will eventually go out to the area of the Holzer Meigs Emergency Department. Anderson said the project will lead to keeping the Ohio River cleaner and would also add to the customer base for Pomeroy.

“Throughout the state, addressing failing home sewage treatment systems – either through providing funds for replacements or upgrades, or the extension of centralized sanitary sewers – is a key goal of H2Ohio,” said Ohio EPA Director Laurie A. Stevenson. “The H2Ohio Program will enable Ohio EPA to extend its principal forgiveness dollars to help more communities like Pomeroy address their water and sewer needs.”

State Senator Frank Hoagland also spoke at the press conference saying there must be a focus on, “infrastructure that is going to support the generations to come.”

According to a press release from the EPA, “As far back as 2013, unsanitary conditions from failing home sewage treatment systems along the State Route 833 corridor have been noted by the Village of Pomeroy, the Meigs County Health Department and Ohio EPA. Since that time, the village has developed a project which would provide sanitary sewer service to State Route 833 and the tributary roads. The project would begin on the eastern portion of Pomeroy and extend north along S.R. 833 into the unincorporated portions of Meigs County.”