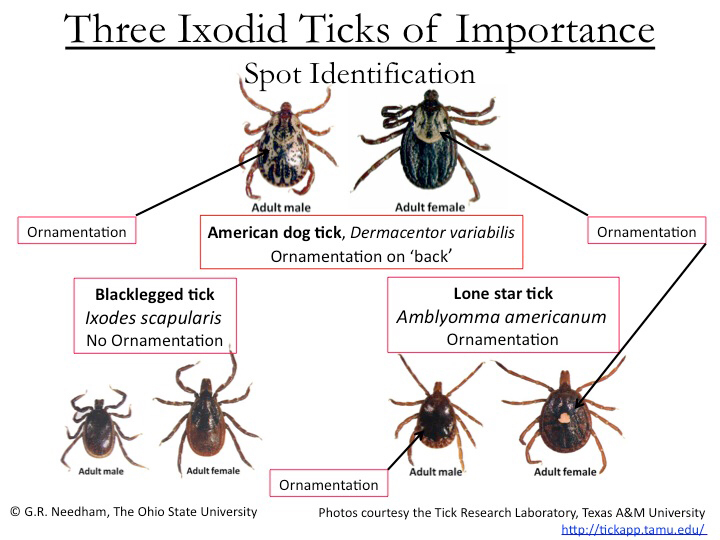 Take precautions to avoid ticks in the outdoors this summer

COLUMBUS, Ohio – The Ohio Department of Natural Resources (ODNR) Division of Wildlife is encouraging hunters, anglers, birders, and all outdoor enthusiasts to use caution and take steps to avoid contact with Ohio’s tick species while exploring the outdoors this summer. Ticks are found throughout Ohio and sometimes carry potentially dangerous diseases.

Ohio has three medically important species of ticks: the American dog tick, blacklegged tick, and lone star tick. All three of these species have the potential to carry and transmit diseases to humans and pets. The American dog tick is the most common tick in Ohio and is found in grassy areas. This tick is most active during the summer months and is the primary transmitter of Rocky Mountain spotted fever.

When exploring the outdoors, everyone should take precautions to prevent a tick from becoming attached to the skin. Outer clothing should be sprayed with permethrin-based repellent according to the label directions. Pants should be tucked into socks or boots and shirts into pants to keep ticks on the outside of the clothing. Wear light colored clothing which will make spotting ticks easier. Thoroughly check clothes and skin for any attached ticks. Don’t forget to check pets and gear, too.

Attached ticks should be removed as quickly as possible to reduce the risk of contracting tick-borne diseases. To remove a tick, use tweezers or gloved hands. Grasp the tick as close to the skin as possible and pull straight out with steady, even pressure. Do not use petroleum jelly, fingernail polish, alcohol, cigarettes, matches, or other similar methods to try to kill or stimulate the tick to back out. These methods do not work, delay proper removal, and may be dangerous.

“Ticks have the ability to transmit diseases to humans in 36 to 48 hours after the initial bite,” said Ohio Wildlife Council President and retired veterinarian Dr. Paul Mechling. “Urban and suburban development as well as outdoor recreation allows the spread of these diseases as people come in close contacts with mice, white-tailed deer, and other hosts for ticks. Pets in an outdoor setting should have tick control.”

Blacklegged tick populations have increased in Ohio since 2010, particularly in areas with forested habitat. This species can carry Lyme disease and is active throughout the year, including during the winter. Also known as the deer tick, blacklegged ticks are frequently found on white-tailed deer. The lone star tick is found mostly in southern Ohio and can transmit several diseases. It is found in shaded, grassy areas and is active during the warmer months of the year.

Dr. Mechling also advises landowners, particularly those who own woodlots, to consider the makeup of plants on their property. According to recent research conducted by the University of Maine, woodlots with invasive plants such as bush honeysuckle, Japanese barberry, and buckthorn had three to four times the number of blacklegged ticks compared to woodlots with no invasive plants.

It is important to note that unlike humans and pets, wild animals such as deer are not affected by the blacklegged tick and suffer no ill effects from Lyme disease. Additionally, Lyme disease cannot be transmitted by the consumption of venison. Hunters should remember that hunting and dressing deer may bring them into close contact with infected ticks.

More information on these and other tick species, and photos to help identify ticks can be found on the Ohio Department of Health webpage. To learn more about tick-borne diseases and their symptoms, visit cdc.gov/ticks.

The Ohio State University is hosting a day-long Ohio Regional Tick Symposium 2021 in October. Registration is available at osu.edu. For more information on ticks in Ohio, visit wildohio.gov.

The mission of the Division of Wildlife is to conserve and improve fish and wildlife resources and their habitats for sustainable use and appreciation by all. Visit wildohio.gov to find out more.