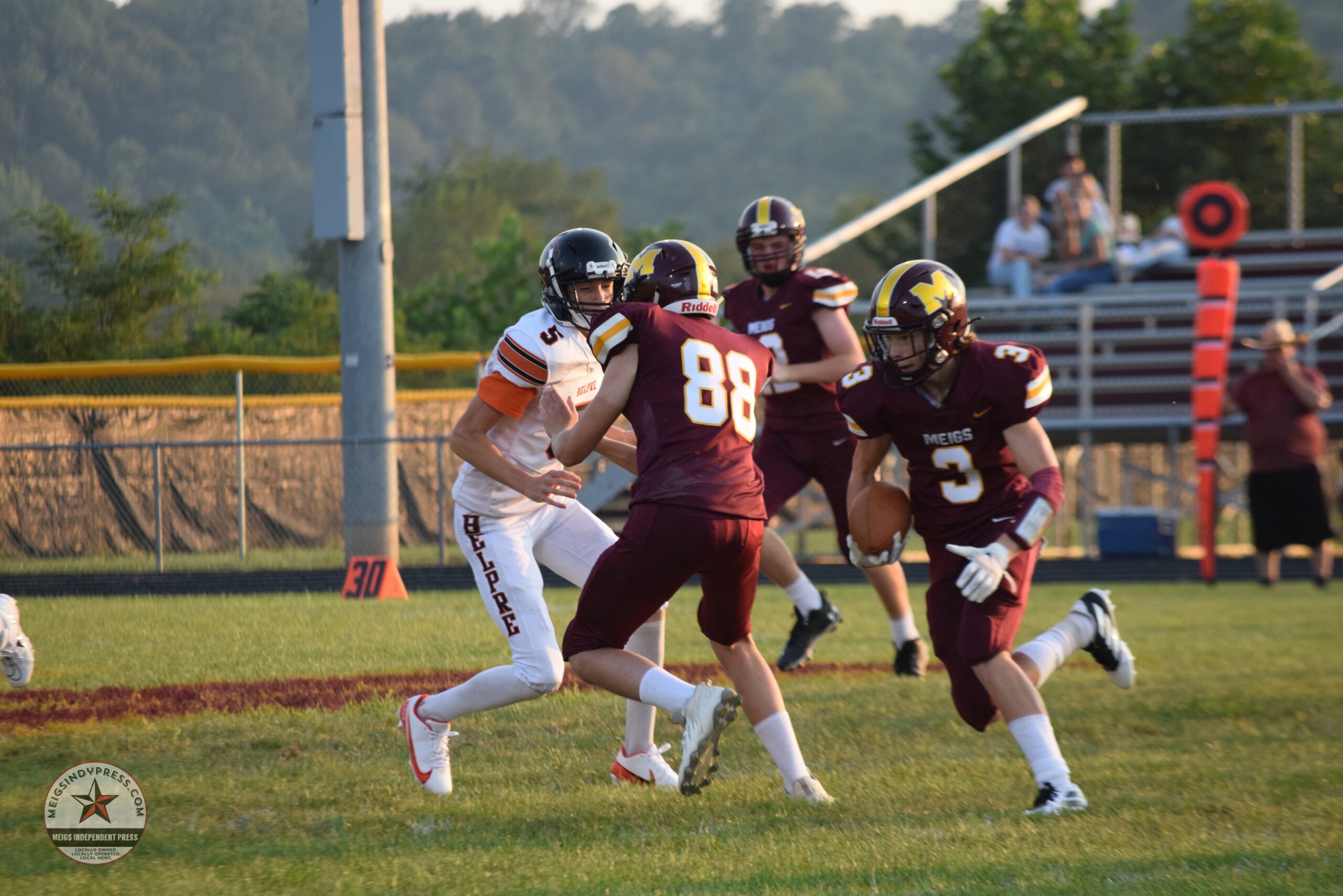 The Marauders received the opening kickoff and at the 11:20 mark on the clock, Coulter Cleland ran a quarter back keeper for the first touchdown for the game. After the extra point, the score was 7-0 Meigs. The Golden Eagles answered back quickly and at the 11:02 mark Jordan Martin scored on their first drive but missed the extra point making the score 7-6.

Meigs fired right back and at the 10:41 mark Coulter Cleland completed a pass to Griffin Cleland for the touchdown. With the extra point good, making it 14-6 Meigs. The Marauders defense held the Belpre drive and forced Belpre to punt the ball to the 40 yard line. Meigs took over and at the 9:55 mark Coulter Cleland connected with Morgan Roberts for the touchdown. After the extra point was made, the score was 21-6 Meigs.

Belpre took the kick off and returned the ball to the 32 yard line. They made 3 passes and moved the ball to the 25 yard line where Jordan Martin ran the ball in for the touchdown. After a failed extra point attempt that put the score 21-12 Meigs. Belpre kicked off where Conlee Burnem was brought down on the 43 yard line. There was a penalty for holding moving putting Meigs back to the 33 yard line. Meigs had another flag for false start moving them back five more yards to the 28 yard line. So with first and 15 Coulter Cleland hands off to Burnem and at the 6:32 mark in the first quarter, Meigs led 28-12.

Belpre took possession on the 35 yard line and moved the ball down the field. After three penalties, Jordan Martin scored again with 3:50 on the clock making it 28-18 Meigs.

Meigs received the kick off and moved the ball across the field. Having one touchdown run by Conner Imboden called back for a holding call against Meigs, but with the ball on the 34 yard line quarterback Cleland handed off to Burnem. Burnem then ran it in for the Marauders touchdown, and with the extra point Meigs led 35-18 with 1:13 left in the first quarter. Meigs kicked off and held Belpre to end the first quarter 35-18.

Meigs did not slow down in the second quarter where they closed out the half 62-30 over Belpre. The second half started with a running clock, where Belpre only scored once at the 5:20 mark in the fourth but Meigs did not let up and scored three more touchdowns to make the final score 81-36 Meigs over Belpre. Meigs will host Dawson-Bryant next week.