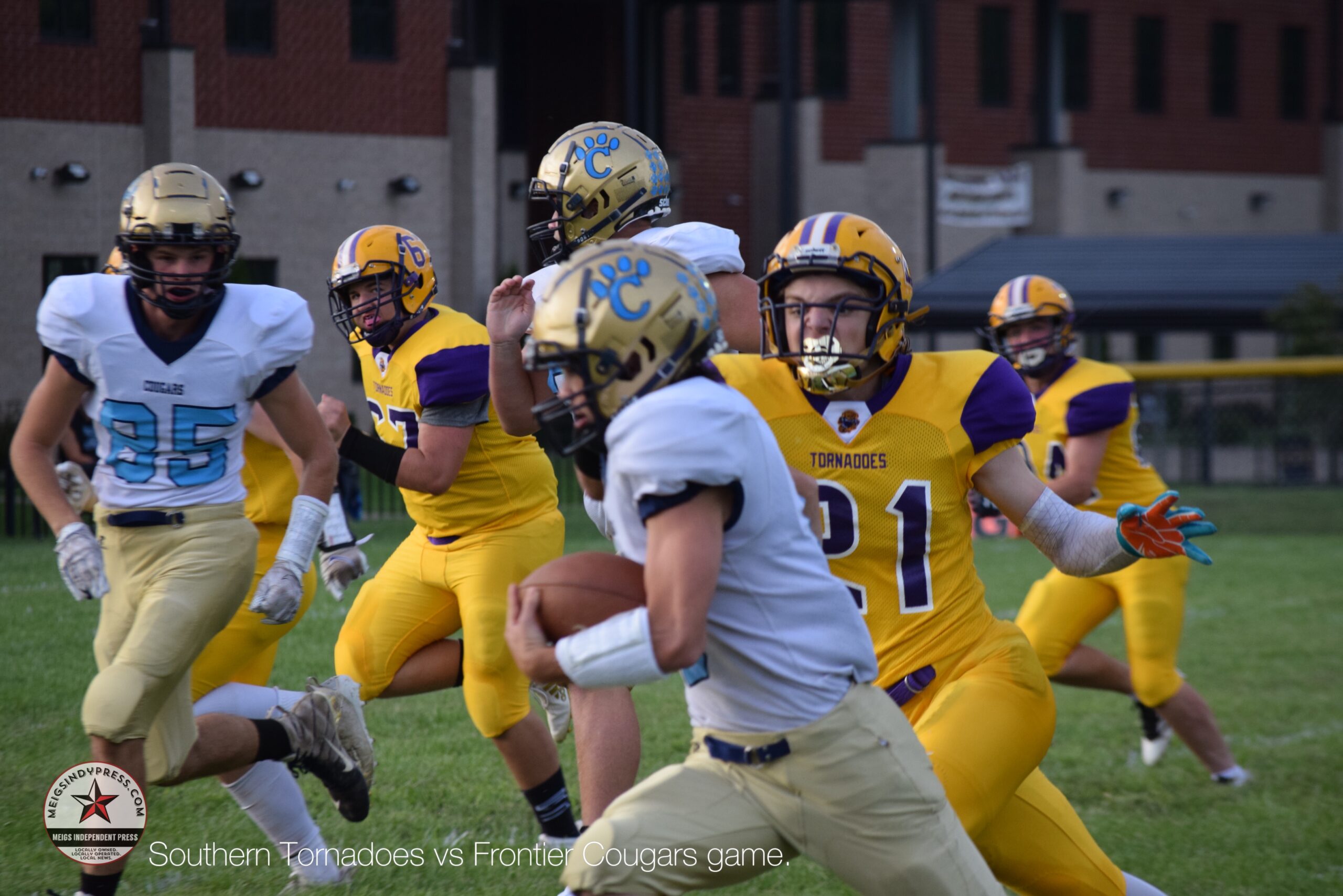 The Cougars won the toss and chose to receive the ball. Tornadoes Derek Griffith kicked the ball to the 20 yard line where the Cougars took it and ran to the 28 yard line. On the first play for Frontier JD Schmidt passed to Tanner Bills and went 44 yards to the Southern 28 yard line. Frontier had two more first downs and got the ball to the three yard line where the Southern defense held, and took over on downs.

The Tornadoes marched the ball down the field to the 20 yard line, when they lost momentum, and was forced to punt. Frontier took possession on the 6 yard line at the 3:25 mark on the clock. Their first pass was thrown incomplete, but on second down they handed the ball to Tanner Bills and he broke away for a 77 yard run to the 17 yard line. After that long run the Tornadoes held strong and with 2:52 left in the quarter took back possession of the ball on the 22 yard line. On the first play of this set of downs, Southern’s quarterback Josiah Smith was picked off by Cougars Lucas Cox, who returned the ball for the game’s first score. The two point conversion was attempted twice with flags on both teams, and on the third attempt it was no good. So at the the 2:42 mark Frontier led the Tornadoes 6-0.

The Tornadoes received the kickoff at the 31 yard line, but went four and out, and punted the ball back to the Cougars, who finished the first quarter with the ball on the 43 yard line. The second quarter started and the Cougars marched on down the field and at the 8:58 mark led the Tornadoes 14-0.

The Cougars took possession on the 48 yard line and moved the ball to the Southern 40 before handing the ball to Tanner Bills for a 40 yard touchdown run. With the extra point no good the Cougars lead was extended to 33-0 and ended the half.

With a running clock per league rules, the Tornadoes come out of the locker room looking to recover from a rough first half. They received the ball in the third quarter at the 20 yard line with Blake Shain running it back to the 32 yard line. The next play Josiah Smith kept the ball and made it to the 50 yard line. But that is as far as the Tornadoes would go, after a penalty for false start that moved them back five yards and a pass to Blake Shain that got them back to the 50 they had to punt tha ball away at the 8:52 mark.

The Cougars went four and out and the Tornadoes took possession at the 4:47 mark. Southern come out of the huddle and on first down attempted a hook and ladder play but Lincoln Rose was stopped for a loss of three yards. The Tornadoes got back to the original line of scrimmage, but on fourth down quarterback Josiah Smith was intercepted again, the Cougars ended the third quarter 33-0.

Southern moved the ball from the 39 yard line to the 17 yard line with runs from Logan Hensler, Josiah Smith, and Blake Shain before running out of time.

Below are scenes from the game, photos by Carrie Rose.