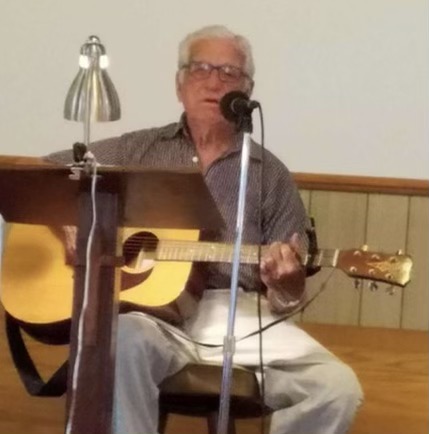 Harry Lawrence Eblin, 91, of Pomeroy, went to be with Jesus on Saturday, February 12, 2022 at Ravenswood Care Center in Ravenswood, West Virginia. Born April 14, 1930 on Union Avenue in Pomeroy, Ohio, he was the son of the late Thomas and Emma Vining Eblin.

Lawrence was everyone’s Papa. He loved motorcycles, guitars, horses and hunting. He shared his great talent for singing and playing his guitar with many people all over the community. He was a member of the Middleport First Baptist Church. He loved to exercise and fellowship with his peers at the Meigs County Senior Center where he was proud to have rowed over 16 million meters on the rowing machine.

His first job was at the Meigs Theater which he talked about frequently. Lawrence worked for Ohio Fuel and Gas Company for ten years and he retired from Kaiser Aluminum after35 years of service. He was a member of the Steel Workers Local 5668 Ravenswood and a proud 1949 graduate of Pomeroy High School.

He married his first wife Kathleen Walburn and they had a daughter Cathy Darlene. After Kathleen’s death, he married Barbara Linkenhoker and they had two more daughters Penny and Patty Eblin.

Graveside services will be at 11 a.m. on Wednesday, February 16, 2022 at Beech Grove Cemetery in Pomeroy with Billy Zuspan officiating. Funeral arrangements have been entrusted with the Ewing-Schwarzel Funeral Home in Pomeroy. Thanks to the staff at Ravenswood Care Center for their great care. In lieu of flowers please donate to the Meigs Council on Aging. Friends are encouraged to sign the online guestbook at ewingfuneralhome.net.