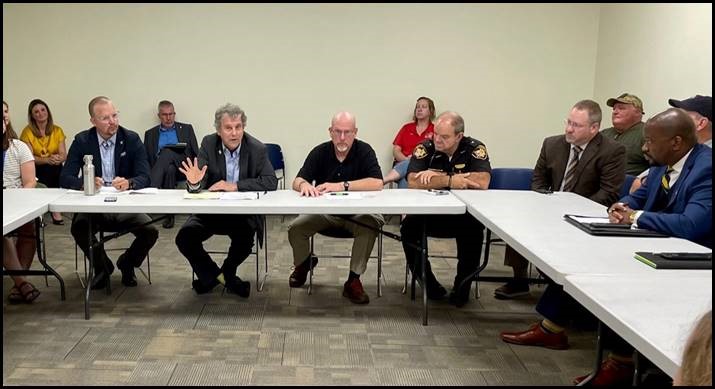 “I’m honored to be the longest serving Ohioan on the Senate Committee on Veterans’ Affairs, and representing Ohio’s 700,000 veterans is a duty I take very seriously,” said Brown at the roundtable. “I’ll continue to fight to invest in improving infrastructure and care at VA facilities. When you love this country, you fight for the people who make it work.”

In June, Brown joined Senate Veterans’ Affairs Committee members in announcing their collective opposition to the Asset and Infrastructure Review (AIR) Commission process moving forward in the Senate, which signifies the end of the AIR Commission. The senators’ opposition will effectively put an end to the AIR Commission and allow the Chillicothe VA to remain open and southern Ohio veterans to continue receiving care at the facility.

Brown was joined at the roundtable by local leaders and veterans who receive care at the CVAMC.

“We, the veterans of Central and Southern Ohio, thank Senator Sherrod Brown and staff for their support in keeping the Chillicothe VA open. There needs to be improvement in care for the VA’s mental health lockdown units,” said Bill Mangus, veteran from Gallia County.

Brown is a fierce advocate for Ohio veterans and has fought to ensure that they have access to necessary medical resources they need, according to a press release. In April, Brown hosted Veterans Affairs (VA) Secretary Denis McDonough at the Chillicothe VA Medical Center (CVAMC) for roundtable discussions with veterans and employees and meetings with CVAMC and union leadership to hear from those who would be impacted by the VA’s recommendations to AIR Commission to close down the CVAMC. Prior to McDonough’s visit, Brown made two trips to Chillicothe to host roundtable discussions with veterans and employees. Brown has continued to meet with and raised his concerns to McDonough that a closure would place a hardship on thousands of Ohio veterans. Approximately 1,400 employees work at the CVAMC and serves an estimated 20,000 veterans annually.

Brown had previously sent his representatives throughout Southeast Ohio to gather information from veterans on the impact of what closing the Chillicothe center would mean to them. One of those gatherings was held in Middleport at the Feeney Bennet Post #128 of the American Legion.

In 2018 Congress passed and President Donald Trump signed into law the VA MISSION Act. Among its many provisions, the law required the Department of Veterans Affairs (VA) to research, develop and publish a list of recommendations intended to modernize VA medical facilities and health care delivery—including through facility expansions, relocations, closures or changes in services. The law further directed those recommendations to be reviewed by a presidentially-appointed and Senate-confirmed Commission, which would then report its views of the recommendations to the President who could end the process or present recommendations to Congress for a vote. Without the Senate’s approval of the nominees, no Commission will be established and the process as outlined by the VA MISSION Act will not move forward.