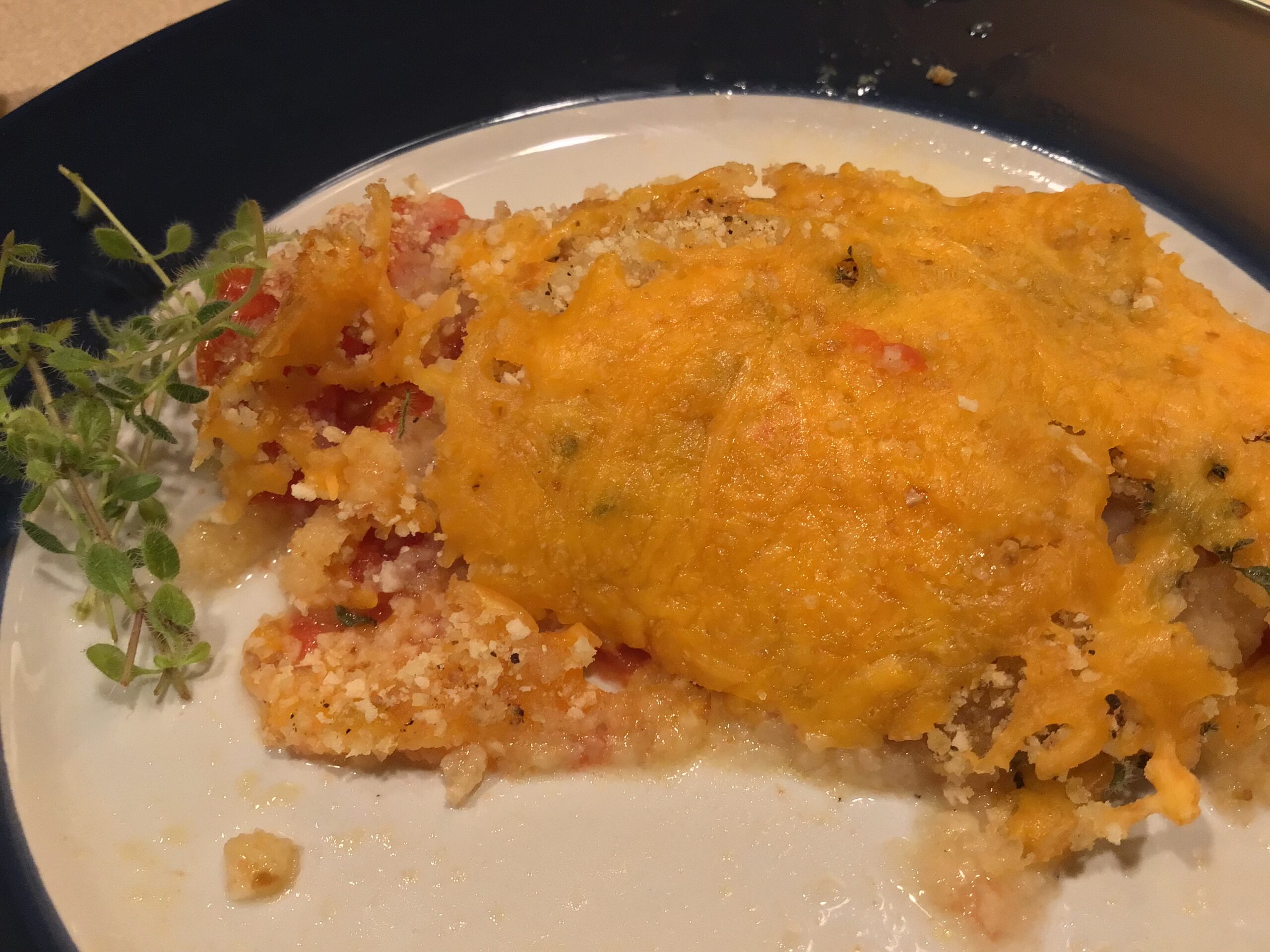 As I mentioned last week my hibiscus plant was under the weather. I’m glad to report that there is improvement. Hopefully it will continue to bloom.

This week a friend gave me some tomatoes from their garden. I was not sure what to do with them other than slicing and eating them. Flipping through an older cookbook I noticed a recipe for scalloped tomatoes. I’ve never had scalloped tomatoes so I thought I would give it a try. It is a simple side dish that is tasty and quick.

The first known cookbook in the U.S. to have tomato recipes was the second edition of the of he ‘Virginia House-Wife’ by Mary Randolph in 1824. It included recipes for scalloped tomatoes, soup, and marmalade. Tomatoes were used in soups, sauces, salads, main courses, and side dishes. Ketchup and tomato pies were also made. In the mid 19th century tomatoes were being grow in gardens every where. Canning tomatoes became popular as a preservation method as well as an easy ready ingredient for recipes.

Since it was once thought that tomatoes were poisonous it is of note how quickly their popularity grew in the mid 19th century.

Ovens with temperature control came into being in the late 1880’s to early 1900’s. Gas oven were first, followed by electric. So with this recipe which, I believe, is from the 1920-30’s the temperature controlled oven would have been around.

Bake in oven for 20 minutes or until hot and bubbly.
Remove from oven and let sit 5 minutes before serving.
Enjoy.

Hints:
I used a 9 1/2 and 9 1/2 inch pan.
The size of pan would depend on how much you wish to make.
I did not pre cook the onions and they were tender when tasted. You could dice the tomatoes to your liking and pre cook them if you wished.
I used a cup of pre made plain bread crumbs. Probably just a little too much.
Fresh cut bread cubes would work. I will try this the next time.
With the ease of the dish I will make this several more times while fresh tomatoes are available.
One of the tomatoes I peeled and one I did not. Could not tell much difference.
The recipe did not call for salt but I added a few pinches before baking. It needed the salt.
I used fresh thyme from my herb garden. I think some dried thyme mixed in would have boosted the flavor. I will try this the next time. Again, cooks choice.
I enjoyed this recipe as there were no measurements. You can experiment and make it your own.

Have a blessed Sunday.