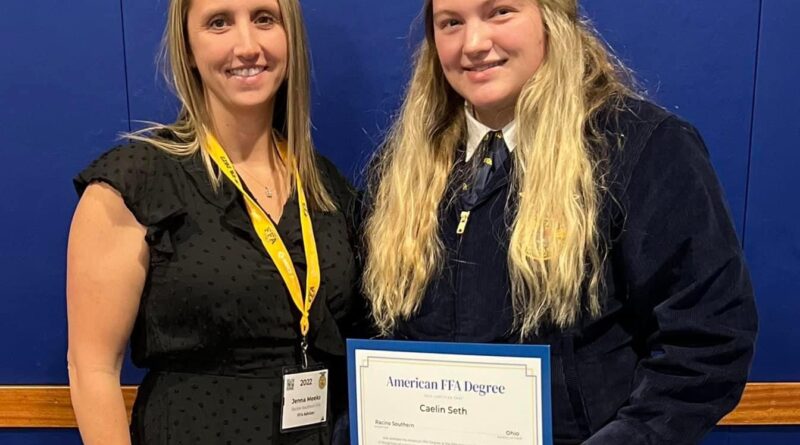 On Tuesday; October 25, 2022 Racine Southern FFA Members began their National FFA
convention trip. The first day they traveled to Cinicinnati where they visited Jungle Jim’s
International Market, Newport Aquarium, then they checked into their hotel where they ate.
There was also a waterpark near the hotel which they went to that evening.

On the second day of the trip they traveled to Indianapolis, Indiana where they explored the career expo, and then they attended the first opening session of the National Convention. The first session consisted of
reflections, opening ceremonies, presentation of state flags, National Advisor’s welcome, grand entry with the National FFA band, sponsor and donor recognition, a keynote speaker–Tamika Catchings; one of the most decorated athletes of all time, and the closing ceremonies. After the first session ended the members went to a place near the hotel to eat and then went back to the hotel for the night.

On the third day they went to the second session which was the opening ceremonies,
National FFA Boards Recognition, National FFA Agriscience Fair, Retiring Address from the
National FFA Secretary, National Chapter Awards, Career and Leadership Development Events
Awards, and the closing ceremonies. As a reward the members ate at the Melting Pot, which is a
fondue restaurant. In the evening after the second session was over the chapter went to Hunters
Honey Farm for a tour, where they got to see how honey is made from start to end and also got to
bottle their own honey.

On the fourth day of the trip the students and the advisor went on a Tour at Fastenal
Company; which is the largest Fastenal distributor around, and then attended the Fifth General
Session at the Lucas Oil Stadium. This session was about NAAE Recognition, Agricultural
Proficiency Awards, National FFA Chorus, National FFA OFficer Team advisors and mentors
recognition, National FFA Agriscience Fair, National Premier Chapter Awards, Career and
Leadership Development Awards, Retiring Address, and closing ceremonies. When the session
ended they went to Cinch World’s Toughest Rodeo at the Indiana Farmers Coliseum.
A Racine FFA member who went on the trip said that their favorite thing about the trip
was “getting to meet all kinds of different people from different states. We all had different
backgrounds and different reasons why we joined FFA.” Another FFA started, “My favorite
thing about convention is being able to walk around and talk to colleges and trade schools who
are agriculturally based and meet people from around the world.”

On the last day of the trip they attended the American Degree Ceremony at the Lucas Oil
Stadium. The ceremony congratulates all FFA members who receive their American Degree,
which is the hardest and highest degree to obtain in FFA. Requirements for this degree include:

● Have received the State FFA Degree, have been an active member for the past three years
(36 months) and have a record of satisfactory participation in the activities on the chapter
and state level.
● Have satisfactorily completed the equivalent of at least three years (540 hours) of
systematic secondary school instruction in an agricultural education program, or have
completed at least the equivalent of 360 hours of systematic secondary school instruction
in agricultural education and one full year of enrollment in a postsecondary agricultural
program, or have completed the program of agricultural education offered in the
secondary school last attended.
● Have graduated from high school at least 12 months prior to the national convention at
which the degree is to be granted.
● Have in operation and have maintained records to substantiate an outstanding supervised
agricultural experience program, through which the member has exhibited comprehensive
planning and managerial and financial expertise. A student after entering agricultural
education must have:

● Have a record of outstanding leadership abilities and community involvement and have
achieved a high school scholastic record of “C” or better as certified by the principal or
superintendent.
● Have participated in at least 50 hours of community service within at least three different
community service activities. These hours are in addition to and cannot be duplicated as
paid or unpaid supervised agricultural experience hours.
● Submit their records and application at the local, state and national level to be approved

Caelin Seth, the daughter of Saun and Jennifer Seth, was able to obtain the American
FFA Degree at National FFA convection due to the completion of all the requirements and all the
hard work and dedication she put into FFA over the years of her involvement in the organization.
Caelin was only 1 of 440 members from Ohio to earn this degree. We are very proud of all of
her hard work and know she will make us proud! Congratulations Caelin.

Overall the trip taught the students several valuable lessons and expanded their horizons
for what they want to do in the future.

Overall the trip taught the students several valuable lessons and expanded their horizons
for what they want to do in the future.