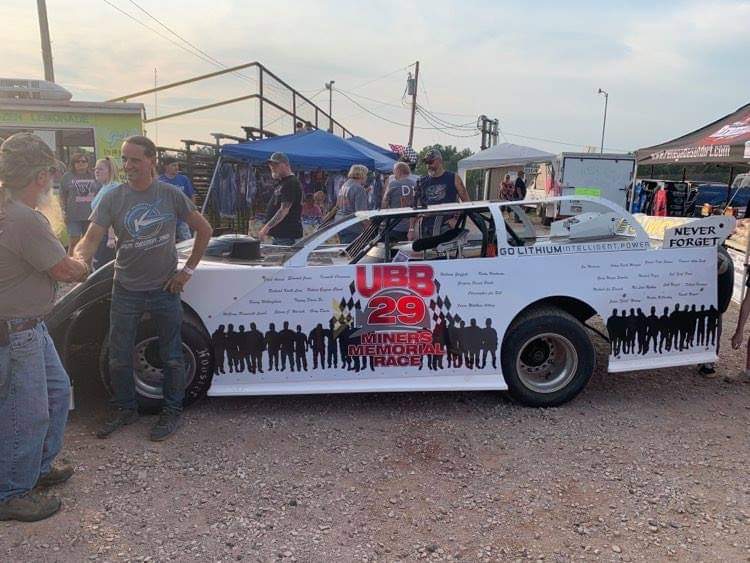 The I-77 Speedway in Ripley, West Virginia hosted two nights of racing July 23, and 24, for the 11th Annual Upper Big Branch 29 Miners Memorial Race. Headlining the weekend was the Renegades of Dirt Tour.

Saturday night the Speedway presented the UBB 29 Miners Memorial with the Super Late Model Division paying $5000 to win with the Renegades of Dirt Tour. The UBB 29 Miners Memorial race was started by Renegades of Dirt President Rob Cyrus and Keith Bowling, Cyrus said, “The race is important for all miners and Upper Big Branch Families as a way to give back.”

This year the families are donating proceeds of the race to West Virginia Children’s Home Society. During evening’s events, a special memorial for the those that perished in the Upper Big Branch Mine disaster was held which including reading the names, information about each of the 29 miners and a lantern release. One of the miners, Joshua Napper, was from Meigs County.

One of the drivers of the Renegades of Dirt tour was Drake “The Kid” Troutman, a 16-year-old from Hyndman, Pennsylvania. Troutman started racing go-karts at the age of three, and moved up  to driving the super late models and the UMP modifies five years ago. The 16-year-old Troutman had 16 wins before this weekend’s event, one in his Super Late Model and 15 in UMP modified. This weekend he added one more win in his UMP modified at I-77 Speedway to keep him in the Renegades of Dirt Tour points lead.

“It’s been crazy fun. We spend 12 hour days in the shop working on the cars, which would not be possible without my sponsors,” Troutman said.

When ask why he got into racing, he stated that his Dad and Pap raced, it is just part of my life.

Racing runs in the blood of a lot of families, local Ravenswood, W.V., driver Kelby Ables also competed in the UBB 29 Miners Memorial Race. Kelby has been racing for four years and calls I-77 Speedway his home track.

Kelby is no stranger to motorsports, he pulled a 4×4 truck before taking up racing. Kelby has had help form his dad, Junior Ables, who raced “back in the day.” Both stated that, “There is more to it, in pulling you go to a track wait four hours and get a 30 second pass, in dirt racing you get to do more, hot laps, qualifying, heat race then the feature. Most people think dirt racing is the same thing just different locations, but every track is different. Every dirt track has characteristics, and those can change lap to lap, depending on the track preparation, weather, and numerous other factors. All in all its fun.”

Ables car has on the back spoiler STILL PLAYES IN DIRT.