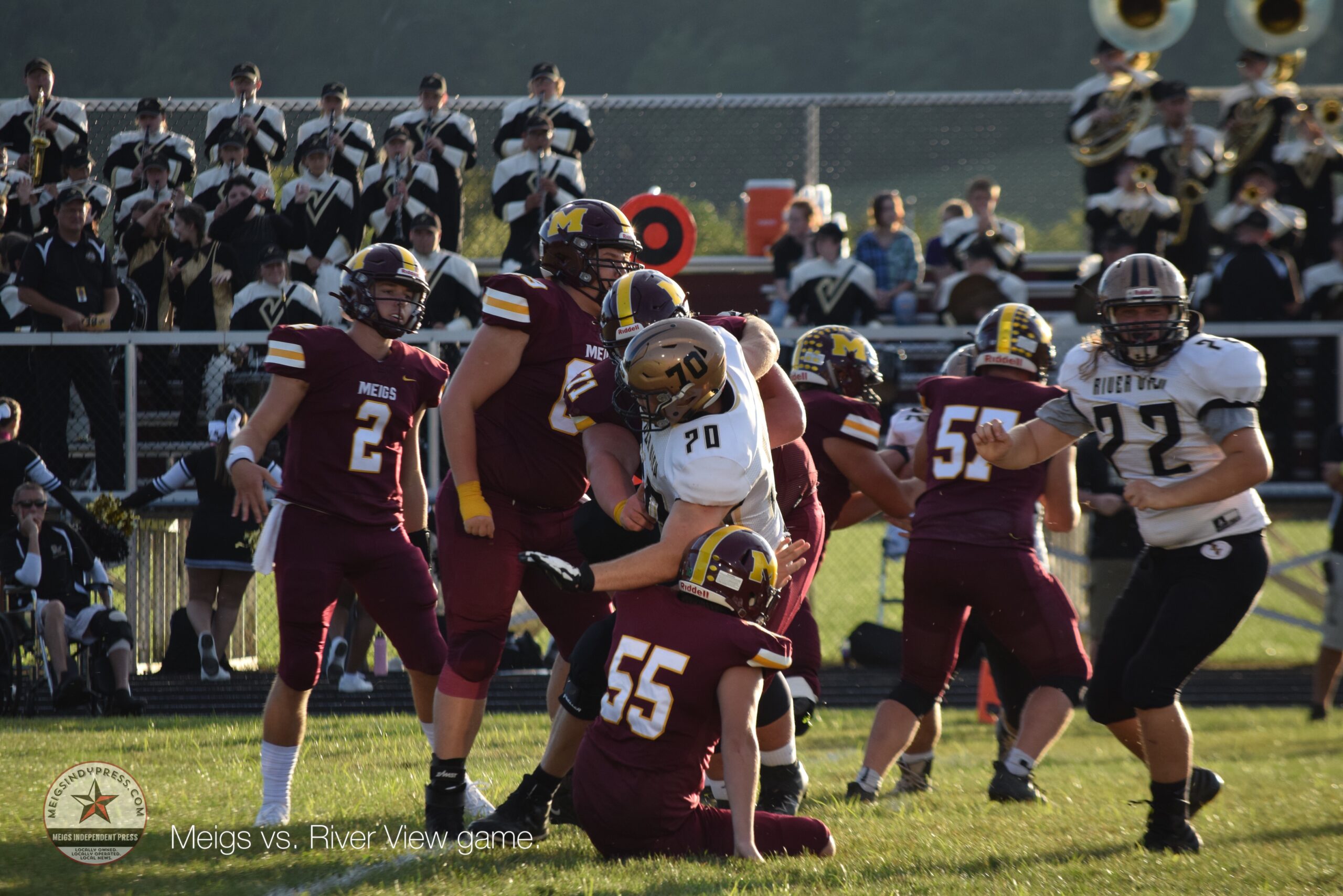 Meigs won the toss and received the ball on the opening kickoff. Conlee Burnem received the ball on the 10 yard line and returned it to the 28 yard line where Meigs took over first down. The Marauders started off with a penalty for encroachment, but moved the ball down the field. They had a second penalty for false start, but after a time out at the 8:54 mark on the clock they moved on down the field to a touchdown pass from Coulter Cleland to Wes Metzger for six points. Kicker Matt Barr put the extra point on the board making it 7-0 Meigs at the 7:50 mark in the first quarter.

Meigs kicked off to River View where Slater Sampsel answered the call and took the ball at the 20 yard line and returned it for the visitors first score. River View went for the two point conversion and scored, making the score 8-7 River View over Meigs at the 7:38 mark.

Meigs Conlee Burnem received the kickoff at the 11 yard line and moved the ball to the 40 yard line before being stopped by River View. Meigs attempted to move the ball but with penalties, a quarter back sack and an incomplete pass, Meigs was forced to punt the ball. River View was able to capitalize and moved the ball down field for another touchdown and two point conversion making the score River View 16, Meigs 7 with 2:39 left in the first quarter.

Meigs was hit with three more penalties in this drive but was still able to score with a Coulter Cleland pass to Morgan Roberts, with the extra point going through the uprights Meigs closed the gap 14-16 River View, to end the first quarter. This would be the last time the Marauders would score in the game.
River View marched the ball down the field and at the 9:44 mark added eight more points with another touchdown and a two point conversion. Making the score 24-14 River View.

Meigs went four and out and punted to River View with 2:24 on the clock. The Black Bears took possession on the 45 yard line and the Marauders were not able to hold them. River View scored again and followed it with a two point conversion to go into the locker room with a score of 40-14.

The Marauders started the second half on defense. River View took the kickoff at the 25 yard line and returned it to the 40. River View then went six yards, and had a false start penalty that moved them back five yards to the 41 yard line. River View threw an incomplete pass followed by an interception by Meigs Conner Imboden. Meigs then moved the ball across the 50 yard line marching down to the 34 yard line before things fell apart and Meigs turned the ball back over to the Black Bears at 6:49 in the third quarter.

River View scored once more at the 5:14 mark and kicked the extra point making it 47-14. The Marauders faced a running clock for the rest of the game as per league rules, and was not able to over come the deficit. Final score River View Black Bears 47, Meigs Marauders 14. The Marauders will host Vinton County next week with kick off at 7 p.m.

Images below by Carrie Rose.